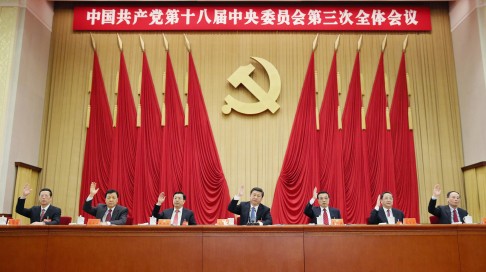 President Xi Jinping (centre) and Premier Li Keqiang (to Xi's left) at the third plenary meeting yesterday with other Politburo Standing Committee members (from left) Zhang Gaoli, Liu Yunshan, Zhang Dejiang, Yu Zhengsheng and Wang Qishan. Photo: Xinhua [1]
Communist Party leaders yesterday pledged to give market competition a "decisive role" in the economy and strengthen judicial independence in a vaguely worded reform blueprint.
The communiqué issued at the end of a four-day party conclave laid down broad policy directions, but contained few particulars.
The focus of the restructuring of the economic system... is to allow the market [forces] to play a ‘decisive role’ in the allocation of resources
THIRD PLENUM COMMUNIQUÉ
The only concrete move was to set up two powerful organs - one to spearhead reforms and another to formulate a co-ordinated national security strategy.
The main objective of the key policy meeting, called the third plenum, was to forge consensus among the party elite and set a general tone for the country's development.
The plenum was attended by 204 full members of the Communist Party Central Committee and 169 alternates. More specific policy measures will be announced in coming months.
The communiqué - the first policy blueprint unveiled by the new leadership under President Xi Jinping and Premier Li Keqiang - struck a bold tone on economic reform, but a conservative one on the political front.
The leaders pledged to strengthen the independence of the judiciary and improve the anti-corruption mechanism.
But these measures are aimed at shoring up the legitimacy and control of the ruling party. No Western-style political reform ideas were mentioned.
The stress is still on developing the economy, which the leadership believes to be the key to the problems facing China.
Already the second-largest world economy, the country is struggling with unprecedented challenges, such as a slowdown in growth, a widening gap in pay, widespread social injustice and rampant corruption. 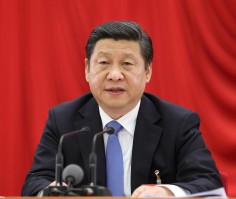 Xi Jinping addresses the third plenary meeting. Photo: Xinhua[2]Yesterday's meeting was overseen by Xi himself. "The focus of the restructuring of the economic system... is to allow the market [forces] to play a 'decisive role' in the allocation of resources," the communiqué said.
For the first time, the party also said the private sector should be treated on the same footing as state-owned enterprises. It said: "Both the public and private sectors are the same important components of a socialist market economy and the important bases of our nation's economic and social development."
The party decided to set up a powerful organ to steer the reform crusade. "The central leading group on comprehensively deepening reforms will be responsible for the overall reform design … and the implementation of reform policies," it said.
On other fronts, the party vowed to "promote the rule of law and respect for the constitution", which will be crucial for a market-oriented economic system to flourish.
Some analysts questioned whether the initiatives could work without introducing equally significant political change.
"My view is that without substantial effort toward political liberalisation, the market economic reform could hardly succeed," said Zhang Ming , a political scientist at Renmin University.
The leadership also announced the formation of a state security committee "to perfect the state security system and state security strategy, and to ensure national security".
Highlights of the third plenum
Highlights and recommendations of the third plenum of the Central Committee of the Communist Party:
1. Achieve "decisive accomplishments" in major fields, build a sound, scientific and effective institutional system in all sectors by 2020.
2. Economic reform is the key to comprehensive reforms. Streamline the relationship between government and the market. The latter will play a "decisive role" in allocating resources.
3. Safeguard the authority of the constitution and law. Deepen law enforcement reform, guarantee the independent use of authority by the judiciary and prosecutors in accordance with the law; improve protection of human rights within the judicial system.
4. Establish open and transparent market rules; let the market play a major role in pricing. Establish a unified market for construction land in cities and the countryside; improve the financial system; deepen reform of science and technology sectors.
5. Set up a national security committee.
6. Set up a leading committee on comprehensive reforms at central level to take charge of the overall design of reforms, co-ordination, implementation and supervision.
7. Establish a comprehensive environmental protection regime, including better delineated property rights over natural resources and regulation of resource use; set up charging mechanism for their use.
8. Allow farmers to enjoy the same benefits of urbanisation as urban residents. Grant farmers more property rights and push for equal resource allocation among urban and rural areas.
9. Maintain the dominance of public ownership while encouraging development of non-public sectors to spur the economy's vitality and creativity. Strengthen the protection of property rights, and make state-owned enterprises adhere to modern corporate practices.
10. Transform the role of government and deepen reforms of its administration. Improve the government's credibility by making it more law-based and service-oriented.
11. Clarify responsibilities within government; reform the tax system; improve the transparency of government budgets.
12. Open up market access, speed development of free-trade zones, and open up inland cities along the borders.
13. Build a strong army by cultivating its allegiance to the party, its combat capability and morale.
Topics:
Communist Party third plenum
More on this:
Beijing to set up powerful national security body in face of mounting threats [3]
'Leading team' to spearhead drive for reform, party plenum resolves [4]
Communist Party urged to speed up China's financial reforms [5]
Communist Party's third plenum leaves blanks in key policy areas [6]
Source URL (retrieved on Nov 13th 2013, 7:58pm): http://www.scmp.com/news/china/article/1354411/chinas-leadership-approves-key-reform-package-close-third-plenum
Links:[1] https://www.scmp.com/sites/default/files/2013/11/12/6ceae0e55de42cf663a12b022201d542_0.jpg[2] https://www.scmp.com/sites/default/files/2013/11/12/xi_address.jpg[3] http://www.scmp.com/news/china/article/1354835/beijing-establish-national-security-body-chart-overall-strategy[4] http://www.scmp.com/news/china/article/1354841/leading-team-spearhead-drive-reform-party-plenum-resolves[5] http://www.scmp.com/news/china/article/1354773/communist-party-urged-speed-chinas-financial-reforms[6] http://www.scmp.com/news/china/article/1354842/communist-partys-third-plenum-leaves-blanks-key-policy-areas